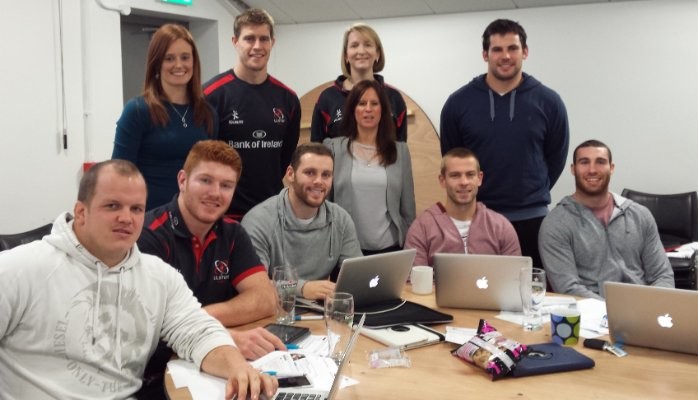 It’s not every day you get to spend the morning with a group of handsome and talented young sportsmen but yesterday I had the pleasure of delivering a training session to some of our local sporting heroes from the Ulster Rugby squad.

The Ulster players gathered in the training room at Belfast’s Kingspan Stadium to talk tactics, but they aren’t preparing for their next big game on the pitch, they’re thinking of a much bigger game than that – they’re planning their futures.

The longevity of a career as a professional rugby player is not infinite, and can be cut short by injury or replacement, but for men who have devoted many years of their lives to the glorious game, there comes a time when they have to ask themselves this question:

So out came the laptops, tablets, smartphones, pens and paper, and combined with a bit of head scratching and team camaraderie, the guys tried to work out just what their skills are on and off the pitch, and how they can use these in the transition from a career in rugby to a new kind of day job.

The players are ably assisted on an ongoing basis by their Administration Co-ordinator Sarah Sherry, and Development Manager, Pamela Gilpin, and yesterday they also had a helping hand from Kate McKay from AKU Training, and my good self.

What is Your Personal Brand Saying About YOU?

As we explored the concept of Personal Branding, aptly described by Jeff Bezos, Founder of Amazon as being what people say about you when you leave the room, we took the players to a pitch that is occupied by over 313 million players worldwide in over 200 countries and territories – none other than LinkedIn itself.

Throughout the session both Kate and I learnt a lot about the skills, qualifications and personal interests of the players, and we can assure you that they aren’t ‘all braun and no brains’…..not that we thought that anyway!

Playing sport professionally requires many of the same skills as it does to be at the top of your game in the business world – self-belief, passion, commitment, determination, good leadership, strong communication, media and public speaking skills, the ability to support others through coaching and mentoring, hard work and perseverance….. and the list goes on.

There is no doubt in our minds that these men have a lot to offer to the business, charity and voluntary sectors. In their game, giving up when the going gets tough is not something that is in their psyche, and the ability to persevere through hard times is a personality trait that is common among successful entrepreneurs. Today’s Ulster Rugby players could be the business owners and executives of the future – look at what Tommy Bowe has achieved already with his business ventures in the fashion industry with his clothing and footwear ranges.

Once a dish washer at the Heathron Diner in Portstewart, Andrew Trimble is now an Ireland and Ulster Rugby player who sits on the board of IRUPA (Irish Rugby Union Players Association) helping to address issues affecting player welfare for all professional rugby players in Ireland. Andrew is also a Patron for CRY (Cardiac Risk in the Young), and post-rugby, is considering a career in business management and financial services.

When Ricky or Richard Lutton (as his mother prefers him to be called!) isn’t playing rugby and promoting the latest Ulster Rugby merchandise he is reading the Property News and chatting to fellow team mate Callum Black about their shared interest in property development and investment.

If the house next door is for sale keep an eye out for Callum! And when he’s not scouring the residential property market for his next investment, he’s doing his bit to help our furry four-legged friends. Callum is a bit of an animal lover, and a Trustee of Assisi Animal Sanctuary, Northern Ireland’s largest independent animal welfare charity which provides shelter for up to 200 companion animals such as cats, dogs and rabbits. The session also proved that he has a bit of natural flair for marketing and personal branding!

Chris Henry is a patron of the Newforge Taggers Tag Rugby Football Club, a charity and tag rugby club for players with learning disabilities. He’s also looking at what he can do to support some other local charities. Watch his profile for more details on this. Chris is actively involved in rugby coaching, and is considering a career in teaching after he retires from professional rugby. A lot of school kids might be more excited about going to school with Mr Henry at the front of the class room!

Darren Cave is a Board Member and Director of Disability Sport NI. Off the pitch he graduated with a BSc in Sport & Exercise Sciences and an MSc in Applied Sport & Exercise Psychology. Although interested in rugby coaching, Darren is also exploring the business world and availing of opportunities to learn more about business management and marketing, as are his fellow team mates Conor Joyce who is currently studying for a degree in Business and Management at Queens University, and Paul Marshall. CIM Ireland – we may have some new members!

Paul Marshall is one to watch in the future. Paul has a particular interest in marketing, advertising and product placement. He’s already strategising about his business idea, however it’s all still top secret at the minute. Watch this space!

Ireland and Ulster Rugby player, Roger Wilson is already active in business. He is a Partner in an online store, Sports Injury Warehouse, which supplies quality products to physiotherapists, rehabilitation specialists and sports people at all levels. Roger is keen to maintain his sporting links post-play with interests in fitness and personal training, and setting up his own sports business is something he has considered. Another one to watch in the future.

Ricky Andrew has a passion for coaching young adults in rugby and strength and conditioning and is an IRFU Level 1 (Stage 3) certified rugby coach, but having studied French and Spanish at university he is the lingual expert of the Ulster squad and is keen to explore opportunities to put these unique skills to good use. Teaching Modern Languages is a possible post-rugby career for Ricky.

Sarah Sherry has had her hands full co-ordinating the movements of the Ulster Rugby team players for the last 15 years. The boys would be lost without her. She loves her job and who could blame her.

As well as being the Player Development Manager for Ulster Rugby, Pamela Gilpin is a Performance Consultant specialising in performance development solutions and training for teams and individuals within business.

I hope you found this introduction to the talents of the Ulster Rugby team and their colleagues on and off the pitch interesting. If you think you could offer assistance to the Ulster Rugby team as they seek to learn new skills in business, and gain experience in their chosen areas of interest, please contact Pamela on pamela.gilpin@irupa.ie